Around a thousand people attended yesterday the inauguration of the Memorial of the Pujalt’s Popular Army, a museum zone recrated from the recovery of the republican camp that in 1938 settled in Pujalt. The event was attended by the counselor Saura and one of the soldiers who lived in the camp..

The mayor of Pujalt, Antoni de Solà, explained yesterday that the Memorial of Pujalt’s Popular Army “is a tribute to a witness of the pile of personal stories that happened in the base of instruction created by the XVIII Corps of army” in 1938 in this municipality of Alta Anoia. After five years of work, Pujalt has recovered the remains of that camp to show how the republican soldiers lived.

The inauguration was attended by Manel Lopez, who had been a soldier in the Republican camp. He explains that he keeps a good memory of his stay in the camp: “I spent three months after going through the fronts of the Ebro and the Segre rivers, being injured and staying at some hospitals, and I was almost there on holidays. I was one of those who built the base, where we recovered to return to the front until we heard the pipes and had to evacuate the village.”.

The crowd that attended the event, as well as the counselor of Interior and Institutional Relations, Joan Saurio, was able to see yesterday the recovered remains of what had been the life of Manuel Lopez and his mates in Pujalt. The memorial is structured on two routes. The first one, marked by the streets of Pujalt, where they had distributed the different services of the base between the existing buildings in 1938 and preserved today, such as the soldier’s home, the commander’s house, the vehicle repair shop , Quartermaster and clothing stores, hospital, cultural center, military offices, refugee house, prison, library and shoe store.

Those in attendance were also able to make the second route completed in the Obacs forest, where they visited barracks, latrines, the interior of air raid shelters, powder depots, Swiss-style tents – antiques with bunker guard and ammunition, trenches and the location of an anti-aircraft machine gun or half-buried dwellings.

The mayor said that these tours are only the first phase of the Memorial of the Popular Army and this summer will continue working for two months in order to recover more shelters and barracks. Likewise, next year they plan to launch a new phase of the memorial, which must culminate with the construction of a center where there is a permanent exhibition of material and spaces for the carry out of didactic and research activities. 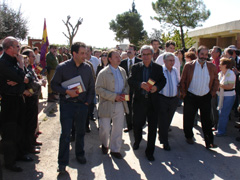