Last Friday, October 5, 2012 a significant representation of more than 40 people from the FFREEE association of the northern Catalan population of Argelès Salen Mer visited the facilities of the Memorial of Pujalts’ Popular Army.

The visit goes through all the recovered and museogramed spaces of the Base of Instruction of the XVIII Corps of the Popular Army during the Spanish Civil War.

The barracks, the shelters, the tents, the rooms of the republican soldiers, the antiaircraft defenses, the gun powder, etc. They make the visitors travel to the end of the Civil War, a particularly traumatic moment for all Catalan society in general and for them in particular, because this morning visitors where children and relatives of refugees.

Those people had to be exiled in France during the months of January and February of 1939. Memories became an emotion when entering the spaces where the museography makes the visitor travel to those traumatic events which should never been forgotten.

The visit was attended by Jacques González, the son of the commander of the base of Pujalt from July 1938 to the withdrawal in January 1939. Jacques González was able to share with the visitors his experience of staying with his mother and his brothers, during Christmas time in 1938 in the Base of Pujalt traveling from Paris to be reunited with his father. It could be said that Jacques González has donated to the Memorial of Pujalts’ Popular Army the documentary and photographic fund that his father conserved and have permitted interpret and document what happened in the Base during his mandate.

The president of FFREEE gave sand of the beach of Argelès to the mayor of Pujalt, Antoni de Solà. Argelès is the place where the most important camp of imprisonment of republican refugees in France was installed. She also give him a fragment of original barbed wire of the field in order to thank his visit to important place of the Memory and praising the work done. Antonio de Solà collected the presents that will be exhibited in the Interpretation Center of the Memorial applauding the work done by the Catalan North Association for the maintenance of the Spanish republican memory in France and encouraging them to continue working offering the collaboration of Pujalt in his task.

At the end, the photograph was made of a group that records their visit and is published on the website of the Memorial of Pujalt’s Popular Army. 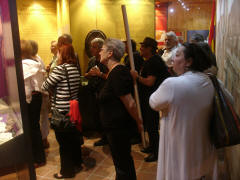 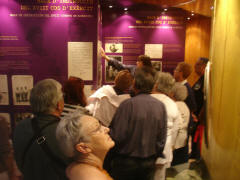